Top 5 Reasons Your PC Could Crash

Top 5 Reasons Your PC Could Crash 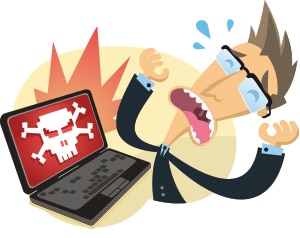 Is your PC running slower and slower? Are you suddenly getting dozens of unwanted pop-ups every time you access the Internet? Does your machine seem to be constantly re-booting itself?

Mike Heil, CEO of ThrottleNet, appeared on TNtv to discuss the top 5 warning signs you need to watch for to avoid a total PC crash.

1. A slowdown in performance due to malicious software or spyware infection.
These and other malware type viruses will cause your machine to run slower and slower. Watch for changes in your desktop background, search engine page changes, or new icons in your task bar that could indicate your PC has become infected.

2. A lack of memory causing sluggishness.
If your machine does not have enough memory or RAM it will struggle with normal day-to-day tasks. It is similar to a person’s short-term memory where one can try to jam too much information into the brain at the same time, causing a sense of confusion.  PCs don’t get confused they just slow down or lose programs. Watch for a slowdown in your machine’s operation especially when working with large files.

3. Operation malfunctions due to a failing physical hard drive.
It is not a question of “if” your hard drive will fail but “when”. One tip off will be certain programs may operate strangely and sluggishly, especially those that haven’t been opened recently. The access light on the computer also tends to stay on all the time.  A failing hard drive makes you feel like the machine is struggling and you are not sure why.

4. Computer freezing due to overheating.
Sounds like an oxymoron but computers that get overheated can freeze and lock themselves in place. There is no error message or warning. Nothing can be done. In many cases the processor gets too hot and causes to the PC to continually re-boot itself. This is an effort by the processor to keep from melting and destroying itself. Fortunately this is a fixable problem which can be caused by too much dust, dirt or pet fur working its way into the machine. Take off the door to the machine and spray the guts of the PC with canned air. This should reduce the heat build-up by some 20-30%.

5. Performance stymied by a PC that is just too old.

PCs slow down over time. The components will eventually fail. A machine that is five years old or older can crash at any time and should be replaced. Short of rebuilding the entire operating system, reinstalling windows and taking other measures, the operation of an old PC will be difficult to speed up. Replace that old machine with a new one and you’ll get optimum speed and performance.

After checking these Top 5 Reasons Your PC is crashing, maybe it’s time to call in your local IT Support experts.

Learn more on TNTv powered by ThrottleNet! Watch the video below.