Why Your PC Is Running Slow

Why Your PC Is Running Slow 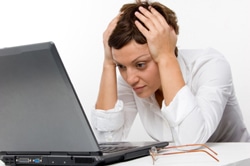 Is the performance of your PC constantly getting slower and slower?

Many factors can be contributing to a slow-down in efficiency.

PC users often treat a computer like their car, if they do routine maintenance the machine will run forever. This is not the case with PCs. All those regularly scheduled updates for Windows and other software programs may be requiring more horsepower than the computer has got to give, causing the machine to decrease speed.

Tool bar plug-ins can be creating issues.  Tool bars downloaded for browsers such as Internet Explorer, Chrome or Firefox often come with three or four tag-on freebees on the backside users don’t even know exist. They can really bog down a computer while the user has no indication they have been downloaded to their machine.

Software developers are also doing their best to slow down your computer. They believe their programs should come-on every time you turn on your PC, whether you need them or not. 70-80 applications could be open and running when all you are seeing are a few on your desktop. Together they take up valuable space and negatively impact performance, virtually consuming all computer power. Turning off some of the background applications could speed-up your computer by as much as 50-60 per cent.

In other cases the problem may not be with the computer itself but with the enterprise network. When large numbers of records are shared on a network, such as customer transactions, they may be slowing down the speed of each individual machine. The PC may be operating efficiently but an adjustment to the network may need to be made.

To remedy a slow running PC it is always best to contact an IT professional for a thorough analysis.