What The Battle For The Best Smartwatch Could Mean For You

What The Battle For The Best Smartwatch Could Mean For You 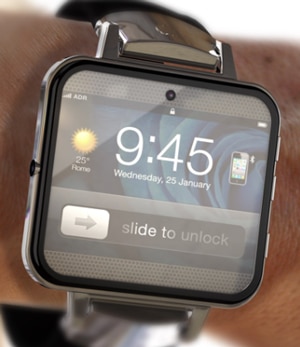 Apple, Google and Samsung are all in a rush to grab you by the wrist. The heat has been turned up for computer wearables and the focus is centered above your hand.

The first Google Android Wear smartwatches have just been released. They appear as the LG G Watch and Samsung’s Gear Live.

Meantime the clock is ticking on Apple’s iWatch debut. The firm is ramping up its efforts to launch their new wearable sometime this fall. In fact the company is reported to have hired the sales director of luxury Swiss watch maker Tag Heuer to help in this effort.

Overall the companies are scrambling to grab their share of a projected wearables market valued at $8.3 billion dollars in 2018.

While the iWatch is still months away, the Android Wear versions are at-hand or now “on-wrist”.

These smartwatches, which work with any Android smartphone running Android 4.3 or higher, are not perfect in every detail but do have some of the promised features that business executives could find useful.

On the down side, size may matter and no doubt these are large watches. Men will find them more comfortable than women who may not appreciate lugging around the devices on their slender wrists.

Applications are limited at this time but more are on the way. Battery life can also be shorter than what is expected. Daily charging is recommended for optimum performance.

On the plus side there is much to like such as placing Google Now on your wrist. This means you can get relevant data when needed, without being prompted. If you are on a trip, for example, with a noon checkout time, but your flight isn’t until 9:00 p.m., Google Now can automatically show you movie times for a film you’ve recently looked up, playing near your hotel.

The G Watch version offers 25 faces to choose from. A swiping movement reveals information cards, notifications and lets you work though all your loaded applications.

The swiping enables you to expand the information card options such as replying, dismissing or opening items on your Android-only connected smartphone. Unlike earlier Android Wear predecessors each transition is smooth and fluid.

The big difference maker, however, is Google voice search.

Voice commands work extremely well. Some say better than even a smartphone. If it doesn’t get it quite right the first time, perhaps hearing “fast” instead of “gas”, you can correct it by saying “No I said gas ” and it will perform the right search or command.

Android Wear takes the handling of smartphone notifications to a new level. An app that appears in Android’s Notification Shade on a smartphone can also appear on the smartwatch. You can also limit apps to prevent overload.

Business types will appreciate the calendar reminders, emails, text messages, Hangouts and other notifications. Anything that generates notifications on Android can be seen on the Android Wear watch.

For example, the Evernote app, allows users to pull up recent notes on their wrist and record audio notes straight from the smartwatch.

You can also get walking directions on your wrist through Google Maps. It will even vibrate when it’s time to make a turn. This is a welcome benefit and avoids having to pull your phone out on the street.

Overall the smartwatch enables you to keep your smartphone in-place and ignore needless alerts. Paired with voice support, you can respond to texts or emails without ever needing to grab your phone from your pocket.

Many critics have praised earlier versions of smartphones such as the Pebble. However the deep integration of Wear apps with Android gives Google a great opportunity to lead this category.

As time goes by the temperature on the competitive smartwatch market will continue to rise. The end result should be a benefit for consumers who will get more apps, better execution and more attractive wearable devices to choose from.

Marc Arbesman is a founder and Partner of ThrottleNet, Inc. ThrottleNet offers an array of technology services and products to help business owners achieve their corporate goals, while reducing overhead. This is accomplished through outsourced Managed Network Services which helps companies improve their technology uptime and IT capabilities while, at the same time, reducing costs. The firm offers custom software development and mobile applications to help companies accelerate their business growth. For additional information contact ThrottleNet online at or call 866-826-5966