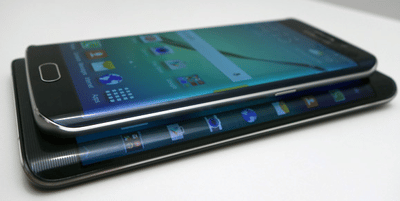 Samsung has just launched its two new jumbo-screen smartphones. The Galaxy Note 5 and Galaxy S6 Edge Plus are big, attractive and well designed. They appear to be the company’s best effort to date to take on Apple’s iPhone 6 series.

The main difference between the two phones is that the Note 5 has a stylus and the software to drive it. The S6 Edge Plus, sort of a super-sized S6 Edge, does not have a pen but instead has a screen that curves around the sides.

Those who like to take notes and use the pen will favor the “5”. Those who want a more multimedia approach with the appearance of more attractive photos and videos will opt for the S6 Edge Plus.

Fans of the stylus will like a new feature in the Note 5 called Scroll capture. It is a tool that allows you to scroll down to the bottom of a document to take a screen grab of an entire document as opposed to just a portion of the screen. One can also write notes on the document before saving or sending it.

Fans of the “6” will like the new curved screen. It has some interesting features. A user can add a shortcut on the curved side of the screen for their favorite apps and contacts. There is also a transparent tab that can be swiped to bring up a drawer of those contacts and apps.

Users can choose where to place the shortcut tab. Right handers may want to place on the right, lefthanders on the left. One can also access the drawer and add their favorite contacts and apps by tapping the + button.

Turning the phone upside down also yields another use for the curved screen. Once shortcuts are set up for favorite contacts, each has a corresponding color. When the device is face down and a call comes in from a favorite contact, the curves will glow with the contact’s color. You will know quickly who is calling without having to turn the phone face up.

Another feature that will soon be available is Samsung Pay. It is the mobile payments system Samsung originally announced in the spring. It should be available in the U.S. in late September with a software update.

Samsung Pay could eventually be larger than Apple Pay. According to Samsung it will work with regular magnetic credit card readers and near-field communications (NFC) payment pads. Apple only works with NFC which is limited to a small fraction of retailers. Samsung Pay could in theory work anywhere credit cards are accepted.

The one factor that could impact the sale of the phones may be the price. One report has the S6 Edge Plus retailing for $815. The Galaxy Note 5 was at around the $740 mark. Both topping the tab for an iPhone 6 or iPhone 6 Plus.

Overall the Samsung phones are attractive as well as innovative. Those who want a “Phablet” type phone with an Android operating system, and lots of features, now have a very good alternative to the iPhone 6 Plus.