It’s Time for The Apple Watch

It’s Time for The Apple Watch 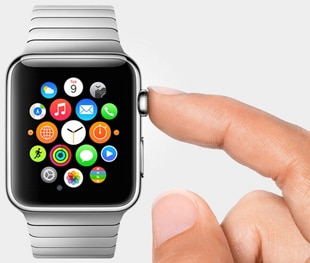 The clock is finally ticking for those waiting to get their hands on the new smart watch from Apple.

The iPhone-compatible wearable is said to be ready to be released this April.

The Apple website said it will come in a variety of styles and colors. Included are 34 different watch choices and nine default watch faces.

Users can customize them in a variety of ways.

The watches all have the same rectangular design. Corners will be rounded off. The differences in styles will be in the “collections” featuring different materials.

Apple is calling them “Watch”, “Watch Sport” and “Watch” edition. Those expecting a low priced version will be disappointed. The Apple Watch starts at $349.

The Watch edition will be the priciest of the group. It features an 18-karat gold case. Apple’s engineers have made the casing twice as hard as standard gold. The watch will come in two colors including yellow gold and rose gold. Prices are believed to reach the $4,000 level.

Buyers can also personalize their watch with a variety of band styles and colors. You will have six band types and 18 colors to choose from.

The bands are interchangeable thanks to a locking mechanism that slides in and out. The idea is to wear your watch for sports with one band and/or dress it up with another band for business or an evening on the town.

Those with large or small wrists will have two face sizes to choose from. One is 38mm and the other is 42mm. The screen can be flipped for both the right and left hand.

The watch interface is different than anything Apple has on the market, and that could take some getting used to.

The digital crown acts as scroll wheel. You can zoom in and out. Early test versions indicate the on-screen touch will need to be very precise in the smaller working space.

According to Apple you can also program your watch for stock market returns, weather reports and calendar events.

Working with your iPhone, the watch does enable you to see your contacts or even use Apple Pay as needed. Of course it does all the usual smart watch tasks such as making and receiving calls from your wrist and scanning messages for working out.

The watch has an activity app that will show your workout progress at a glance. The goal is to get you to sit less, move more and get some exercise. A separate app for dedicated cardio sessions is also available.

Apple is already fielding a few complaints about the battery life. Unlike their competitors the Apple Watch will need to be charged daily, as opposed to every 48 hours.

Demand for the Apple Watch appears to be strong. CNET, https://www.cnet.com/news/apple-watch-to-be-most-successful-smartwatch-ever-research-shows/, quotes a research report from CCS Insight detailing that worldwide wearable sales will spike in 2015, jumping 158 per cent year over year to 75 million units.

The research firm said the Apple Watch will become the “most successful smartwatch ever” and sell up to 20 million units this year.

Many companies such as LG, Pebble, Samsung and Motorola have developed and sold smart watches. But none have captured the interest and excitement of the wearables market.

Like its iPhone and iPad lines, the Cupertino company seems to have the pulse for what today’s tech buyer wants. And their timing is usually spot on.