Understanding the Economics of IT

Understanding the Economics of IT 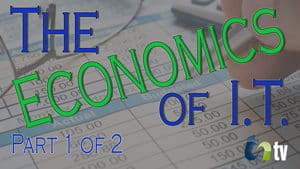 Are you confused about how much you should spend annually on IT? Does your budget allocate too much or too little for IT support?

In part one of a two-part series, Eric Aguado, a partner with ThrottleNet, appeared on TNtv to discuss how a business can create a baseline to plan for annual IT expenditures.

Aguado cited a study from Gartner, the large research firm, which released a report called Gartner IT Metrics Data. The survey details by industry the percentage of annual revenue a company spends on tech support. The study was released in December of 2013.

Those companies spending the most money were in software publishing and Internet services, banking and financial services, and media and entertainment. All spending five per cent of their annual budget or more on IT.

In the middle were healthcare and professional services firms spending 4.2 per cent, while those in construction and energy ranked near the bottom at around 1 per cent.

Those dealing with compliance issues were most likely to spend more than those without oversight by outside agencies.

Companies can compare their expenditure by industry when formulating their own budgetary needs.

Assessing IT support expenditures by employee is another planning tool.

Gartner information indicated that companies in the insurance industry spent the most at around $27,600 per employee, professional services averaged $9,200 per worker, while construction was at the bottom at $4,300 per worker.

On average, a company spends around $7,000 per employee.

The average is based on all of a firm’s staff, even laborers and others in the field who may not regularly use a computer.

The study broke down those costs into three areas. The first is the cost to run a business as it is now paying an in-house tech staff, outsourced IT firm, hardware and other items. That is around 67% of each dollar spent.

The second area is the cost to grow a business such as how to get products to a customer faster. This accounts for 20%.

Thirdly is the cost to transform a business which typically makes-up 13% of each dollar spent.

More information will be available in Part 2 of this series.