Phone Wars: The Samsung Galaxy S6 Is Ready to Launch

Phone Wars: The Samsung Galaxy S6 Is Ready to Launch 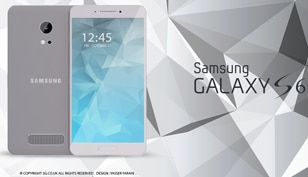 Samsung is making its latest assault against Apple and others in the battle for smartphone supremacy.

The new Galaxy S6 and S6 Edge should be ready for purchase sometime in April.

The new phones appear to be Samsung’s most sophisticated to date, slightly larger than the iPhone 6. They even feature a larger screen and higher resolution than their Apple counterparts.

The screen does feature the Super AMOLED displays Samsung is known for.  It features a 2560 x 1440 pixel QHD resolution. All indications are that the images are very crisp and clean.

Photo fanatics should be pleased with a front camera that will have 5 megapixels and an “industry leading” 120 degree wide angle lens. The rear camera will have a 16MP sensor. It has been reconfigured for low light. Look for a 35% improvement over the S5 lens.

The auto HDR mode remains the same. You can see the image in HDR mode before your snap it. Optical Image Stabilization will keep shaky hands from blurring the photo.

The phone can be recharged wirelessly on any charging panel. You can switch to Ultra Power Saving Mode when necessary and make calls and text even when down to 10% of battery life.

The charging system has been improved too. Charge for just 10 minutes and you will be able to get a full 2 hours of HD video playback.

The S6’s operating system is the much discussed and sometimes problematic Android Lollipop 5.0. It has a 64-bit architecture with an octa-core processor and 3GB inside.

The S6 features a new type of flash memory in the handset called UFS (Universal Flash Storage) 2.0. This is designed to enhance data speeds and power consumption. Speed of use will be improved as well.

For better or worse Samsung has stuck with its TouchWiz User Interface. Samsung though has slimmed it down removing a number of popup menus and streamlining the apps.

Samsung’s fingerprint scanner, seen on other versions, is also on board for security. The heart rate monitor is also a carryover from the S5.

Mobile payment will be another feature. Payments with NGC and QR codes can be made easily.

The new S6 phones enter an already crowded smartphone battleground. In addition to the popular iPhone 6, the HTC One M9 has already launched. The One M9 features a powerful Qualcomm 810 snapdragon chipset, a 20 megapixel camera, and Dolby audio.

Sony’s Xperia Z3 is also a player with a waterproof body and 1080p display. Its new version of the phone, the Xperia Z4, will be out soon.

While all indications point to great improvements in this latest Samsung offering, the jury will be out as to many how many Apple users or non “S” users will jump ship.

Samsung’s hope is to make some inroads in the smartphone war before one of their competitors fires the next salvo.