Article by Katherine Murray and posted on TechRepublic. Click here for original article.

How hard is it to get everybody in the same room at the same time one the same day? If you’re trying to manage a team, chances are it’s pretty difficult. Outlook 2010 includes some new features that make it easy to manage multiple calendars and share the information you all need to know.

1: Add the calendars you want to view

Outlook 2010’s Calendar view lets you add the calendars of your team members, as well as your home and work calendars. Click Calendar to get started and then click Schedule View in the Arrange group of the Home tab (Figure A). Next, click Add A Calendar at the bottom of the Calendar view area. If you enter someone’s name in the text box and press [Enter], Outlook will search your contacts for that person’s information and add the calendar entry in the My Calendars list.

Click Add A Calendar and enter the name of the person whose calendar you want to view.

Use the check boxes in the My Calendars list to control the calendars that are displayed in the Calendar view area (Figure B). You can add as many calendars as you like, but be forewarned — the more you add to the area, the less you can see. For simple things like availability, it might work to show five or six calendars at once. But if you want any level of detail, you’ll need to limit the number of calendars you view at any one time. If you want to know availability of the group to schedule a meeting, click Schedule in the New Meeting window to see when different people are available.

Add and control the display of calendars by clicking the check boxes in the My Calendars list.

If you often need to view the calendars of everyone on your team at the same time, you can create a calendar group. Begin by clicking Calendar. Then, in the Manage Calendars group of the Home tab, click Calendar Groups. Choose Create New Calendar Group, enter a name for the group, and click OK. Select the names of the contacts you want to add to the group, click Group Members, and click OK.

4: Open and use a shared calendar

Before you can view other people’s calendars, you need their permission and they need to have set up their calendar to be shared. You can open a shared calendar by clicking Open Calendar in the Manage Calendars group and clicking Open Shared Calendar. In the Open A Shared Calendar dialog box, click Name to select the person from your contact list. Click OK, and the shared calendar will open in your Calendar window.

Depending on how busy you are, you may have lots of old appointment information taking up space for no good reason. You can archive the appointments you no longer need by changing your calendar properties and setting up AutoArchive. To do this, right-click your calendar in the My Calendars list and click the AutoArchive tab of the Properties dialog box. Click Default Archive Settings to use the default settings for archiving your calendar entries. Or click the Archive This Folder Using These Settings radio button and enter the settings you want Outlook to use. Click Apply and then click OK to save your changes. 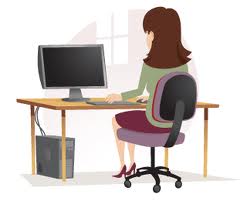 For most of us, sitting at a desk all day is common place. But did you know sitting all day could kill you? Read on to learn more about this surprising (or not so surprising) finding.

According to a poll of nearly 6,300 people by the Institute for Medicine and Public Health, it is possible that the average person spends about 56 hours a week sitting (usually at a computer, in a car or watching TV). I’m definitely guilty of it all. I’m planted in front of a computer all day and by the time I go home, all I want to do is veg out in front of my big screen and relax. Sound familiar?

So what does this mean for the millions of other office workers and sedentary people? Nothing good. According to research, sitting all day (even if it’s only 8 hours) can lead to increased risks for obesity, heart disease, posture issues, diabetes, muscle weakness, back pain and more. Sadly, most of us are unaware of this fact.

University of Missouri Professor Marc Hamilton wrote in the 2007 November issue of the medical journal Diabetes: “The dire concern for the future may rest with growing numbers unaware of the potential insidious dangers of sitting too much.”

You might be asking yourself, “What can I do about this?” It’s not like you can run around doing jumping jacks throughout the office every couple of hours. While good for your body, that might not be so good for your job.

Here are a few measures you can take to improve your health while working at the office all day:

So what does this have to do with information technology? Not much, yet everything. We work at computers all day, as most of you do. One ThrottleNet employee decided to raise his desk up high (about 3 feet off the ground) and get a tall chair so he had the option to switch between sitting and standing all day. Here it is folks:

Socialsearching.info Finds Tweets and Facebook Posts From Way Back

Facebook and Twitter are becoming ever more useful information sources. If you saw a helpful post or tweet a while ago but can’t remember it exactly, Social Searching (or Socialsearching.info) is a quick and easy tool to help you find it.

Twitter searching, I found, works best if you enter the name of the person as well as the keywords you’re searching for. Besides helping you find specific tweets, it’s also an interesting tool to get a list of all tweets by a particular user on a topic from as far back as possible.

12 Useful Keyboard Shortcuts We Can All Use

It’s nice to learn a lot of different and varying hot-key combinations to minimize the amount of hand movement from the keyboard to the mouse.  One of my favorite hot-keys to use as a short-cut is:

In: Business & Technology, Computer Tips By ThrottleNet
Tips by Heather Ervin, Director of Marketing at ThrottleNet Inc.
*If you have more questions after you read this list, contact media@throttlenet.com!
Comments are closed for this post, but if you have spotted an error or have additional info that you think should be in this post, feel free to contact us.
Loading, please wait.

Why do Computers Crash? Top 5 Reasons Your PC Might Crash

What causes a computer to crash? Computers crash for a variety of reasons. Random computer crashes are both frustrating and difficult for an average user to diagnose, but underneath the surface of a computer crash are five likely culprits examined below.

Every Windows-based PC has something called a Windows registry. The registry contains several files that are integral to the performance and operation of your computer. Over time, some of those files can become corrupted, be misplaced or get lost altogether. When that happens, the system registry becomes compromised – and frequent crashes are all-too-common symptoms. The best way to rule this possibility in or out is by running a Windows registry cleaning program. Such programs scan your Windows registry for problems then automatically make repairs. If you run a registry cleaner and the crashes persist, they are probably being caused by a different issue.

Windows operating systems handle file organization in a way that isn’t very intuitive. Basically, they break files up and fit them into gaps in the computer’s memory. As time goes by, these disorganized files can prompt frequent crashes. Luckily, a great optimization solution is built right into Windows-based PCs: the disk defragmentation utility. Although its location on a computer varies, you can generally locate it within the System and Security section inside the Control Panel. By running a defrag once every few months, you may be able to keep those pesky computer crashes at bay.

Malicious software can take many different forms. Sometimes, it’s a virus that is accidentally unleashed after opening a strange email; other times, its adware that tags along with other information that is automatically downloaded from a website. Whatever type it is, there’s no question that malicious software can wreak havoc on a computer’s performance. Happily, there are many topnotch programs out there that regularly scan your computer for the presence of such problems – and that help guard against them, too. Buy one, install it and use it regularly; your crash issues may come to an end.

When you buy a new computer, it feels like there’s no end to the amount of memory that it has. Of course, this isn’t true at all. As never-ending as the available memory on your PC may initially seem, the fact is that it can be depleted with incredible speed. You can find out for sure by checking the information within “My Computer.” If it appears that your available memory is low, you can use a PC cleanup program to remove unnecessary files; such programs remove things like temporary Internet files and other file debris that can suck away much-needed memory.

If you’ve run through all of the preceding possibilities and continue experiencing frequent crashes, a hardware issue could be to blame. An easy one to rule out is overheating. A computer’s CPU, or central processing unit, includes a fan that is designed to keep it running cool. Sometimes, the fan wears down and doesn’t work as efficiently; other times, it’s just not able to handle the work that your computer has to do. In either case, buying a bigger, better fan isn’t very expensive. If it puts an end to your PC crashing problem, it will have been more than worth it.

Problems with Computers Crashing at Your Business? Contact ThrottleNet

ThrottleNet is a full-service managed network provider in St. Louis, providing consulting and outsourced IT solutions for small business. Are crashing computers keeping your business from running full-throttle? Contact us today to learn more about our managed solutions!